Looking to finance this bike?

This bike is an extremely well maintained bike having new tyres, (including an oversize 260 rear!) plugs and filters all in the last 500 miles. The reason for the low mileage is the fact that the owner was in the US Navy and spent a lot of time at sea.

When he was away for long periods he stored it at his Fathers climate controlled garage in Florida.

To say it is clean is an understatement as you can probably be seen from the images, all the factory paint gleams as does the chrome and alloy…beautiful.

The bike rides superb and starts/accelerates and stops exactly as a Hammer should, It also sounds amazing.

These are great bikes that have a strong following, if you aren’t aware of them do yourself a favor and google Victory Hammer and research them a little more.

See below a small extract from one.

We wouldn’t exactly classify the Hammer as a “power cruiser”, although it is in fact as powerful as many of the bikes that receive that label. Victory may have created its own category with the Hammer; let’s just call it a “muscle cruiser”. 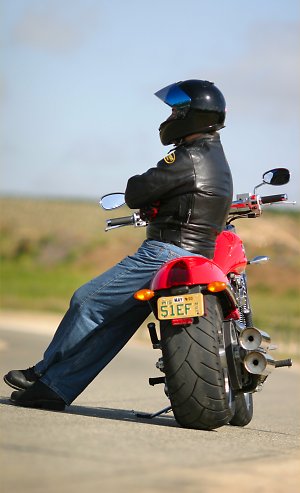 Muscular is definitely a word that fits with the Hammer. The huge rear fender wraps closely (well, as closely as possible on a bike that actually has rear suspension) over the massive 250mm-wide rear Dunlop. Up front, the fat look continues with big 43mm inverted forks, carrying 300mm discs and 4-piston Brembo calipers.

Victory’s new 100ci (1634cc) V-Twin is exclusive to the Hammer (for now, at least), and it packs the power to back up the bike’s intimidating looks. The air-cooled twin is fuel-injected and counterbalanced for smoothness, and up top you’ll find a single overhead camshaft actuating 4 valves per cylinder. These valves feed the slightly undersquare (101mm x 102mm bore x stroke) bottom end, sucking air through 44mm throttle bodies to be compressed by 9.8:1 compression pistons.

The new powerplant is also attached to an all-new transmission, featuring 6 speeds with the top gear being an overdrive designed to keep the rpm low during highway cruising. The transmission turns the rear wheel by means of a belt drive featuring a carbon-fiber reinforced belt.

Previous Next
Close
Test Caption
Test Description goes like this